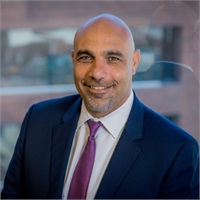 Shehab Mohammad is the President and Chief Executive Officer of NWF Advisory Group, Inc. headquartered in Los Angeles, California. Shehab began his career as a financial advisor assisting clients in reaching their financial goals. Over the years he moved into a leadership role and now runs the day to day operations of NWF Advisory. He leads a team of dedicated advisors in helping their clients achieve their financial goals.

Shehab also prides himself on stepping outside his work environment and back into the community as he is involved in a variety of non-profit organizations including sitting on the advisory board for the Optimist Youth Homes while also serving as the founder of the Michael Curry Foundation.

Shehab is a native Californian and a resident of Long Beach where he resides with his daughter and wife Mary. He values fitness and a healthy lifestyle, particularly enjoying traveling, going to the beach, and sports (especially UCLA Athletics). Shehab also competes in Triathlons recently completing his first full Ironman in Tempe, AZ.